When we decided to journey South for Spring Break, Brooke had no idea what she was in  for. She has been to Florida many times–Disney, Ft. Lauderdale,  Naples, Miami, all  by air.  Traveling by car, however, was a life-changing experience for this fourteen year old. You certainly see a lot more than drifting clouds from … END_OF_DOCUMENT_TOKEN_TO_BE_REPLACED 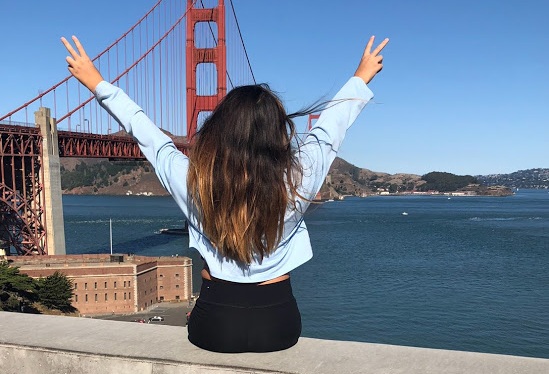 Talk about an epic weekend! Hi everyone. It’s Brooke. I just got back from the most incredible weekend in San Francisco and want to share our adventures with you. I’m not saying we hit everything on our list because we didn’t come close, but we certainly tried to get as much in as possible.

In honesty, a weekend is not nearly enough time to spend in San Francisco. We left feeling two or three more days minimal were much needed. Here’s what we did accomplish from a Friday-Sunday afternoon in my new favorite American city, San Fran: 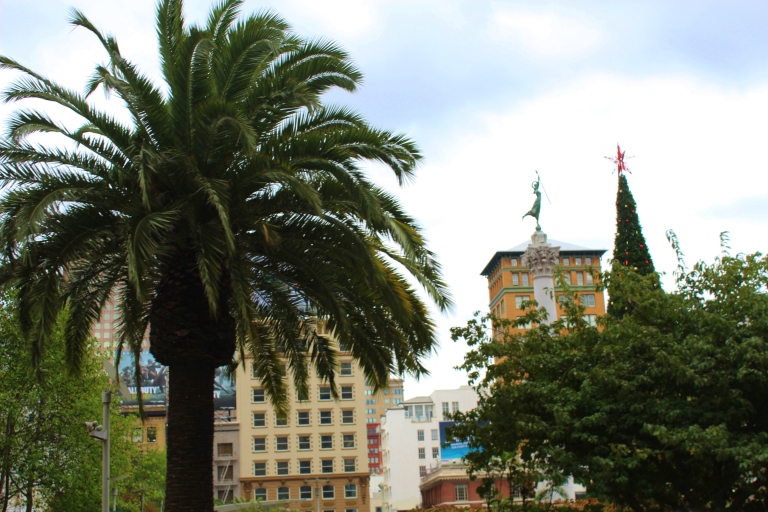 We arrived at the San Francisco airport and took the 30 minute BART train ride to Hotel Vitale, a beautiful boutique hotel located next to the Embarcadero waterfront and the Ferry Building. When we read that Hotel Vitale has a luxurious penthouse level spa with rooftop soaking tubs it was a done deal! Upon arrival, we were given hot towels to clean our travel worn hands, and it only got better from there.  I can guarantee you won’t find a more beautiful hotel for a San Francisco weekend retreat.  Everything a jettsetter looks for in a luxury hotel is here, from the spectacular views, plush bedding, lavish bathroom, exquisite food, tranquil spa…you name it–Hotel Vitale has it.  And hand to heart, the best pizza we’ve ever tasted in our entire lives–sorry Italy and New York! 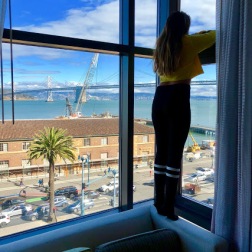 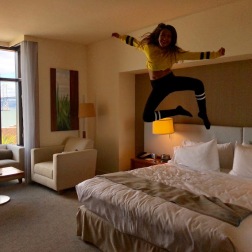 Being kind of late and feeling tired from our school/work day, we relaxed in our suite and soaked in the evening views from our window as well as the breathtaking views from the terrace on the 7th floor. 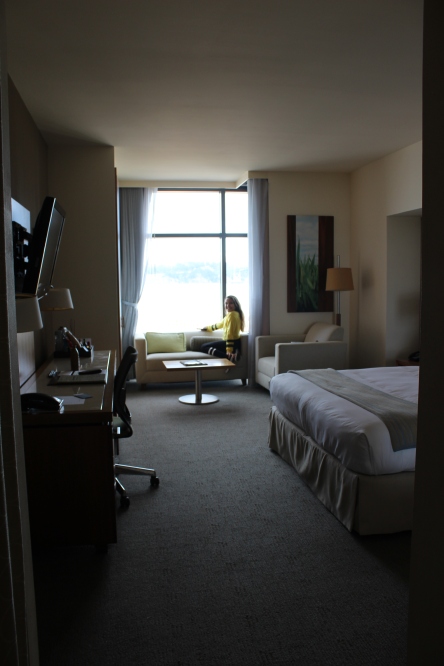 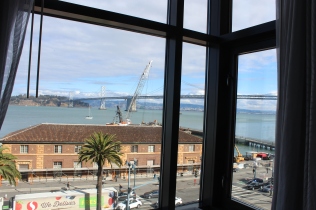 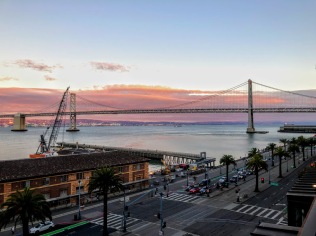 We woke up early and headed right over to the Ferry Building to explore the beautiful farmer’s market.  We watched with envy as locals filled their wheely carts with a kaleidoscope of fresh fruits and vegetables.  After checking out the Ferry Building, we hopped on a cable car to Fisherman’s Wharf.  Here, at Pier 39, I fell in love…..with sea lions.  I literally could have stayed right there for the rest of the weekend and watched these adorable creatures. It was fascinating to see the distinct and diverse personalities of the sea lions. It was seriously like watching an intense drama on Netflix. Who was going to get shoved into the water next? Right in the middle of the sign of Pier 39, sat the all mighty king sea lion, guarded by his nobles! He sat tall and proud and made sure no other sea lions overthrew his reign. On the opposite side of the docks, lay the very quiet and docile females, unlike the rowdy males, barking and causing major commotion! LOL 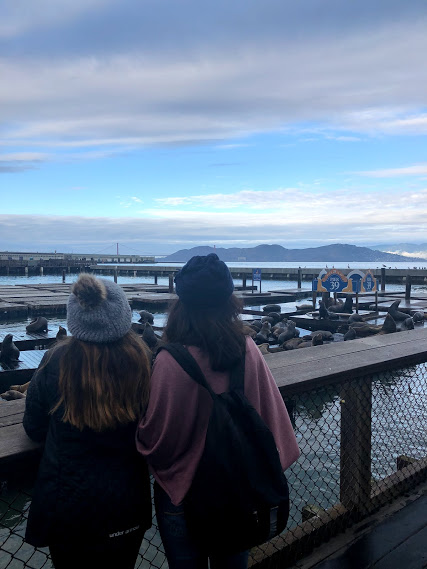 After my mom coaxed (dragged) me off the pier, we headed to catch a trolley ride with the Powell-Hyde line which runs from the corner of  Powell and Market Streets to the end of Hyde at the waterfront. This is an absolute must do!  We waited about 20 minutes in line, until we were able to be first  onto a trolley so that we could stand on the front left side to get the best view and greatest thrills up and down the steep hills! 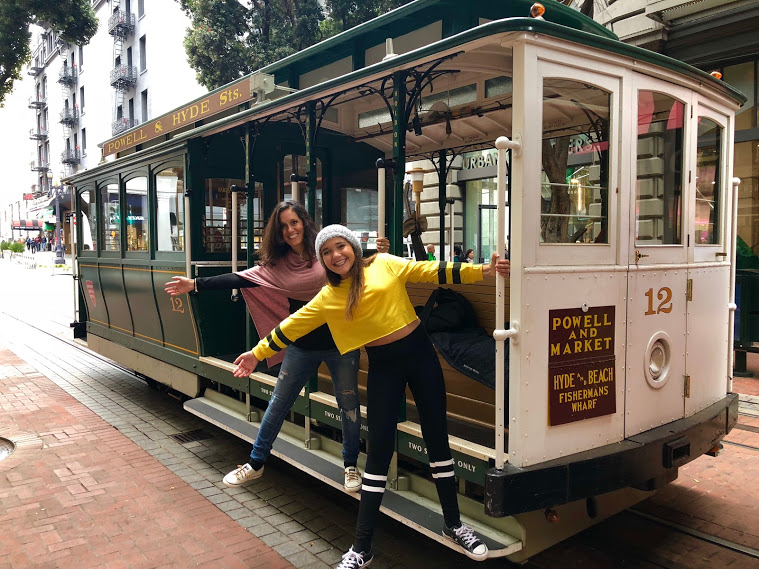 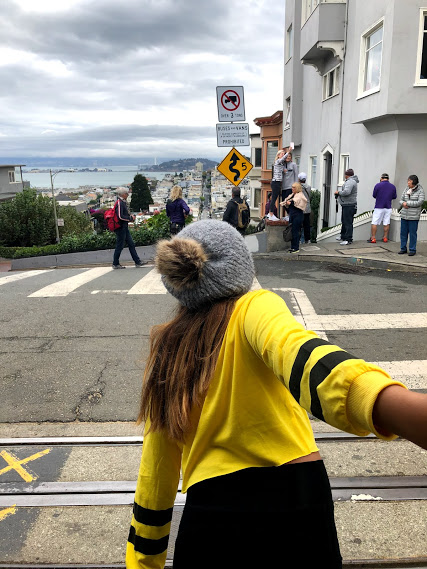 This trolley ride is a great way to see many different Neighborhoods such as Chinatown and iconic San Francisco locations like crazy crooked Lombard Street. We bought the all day hop on/off pass so we could explore as much as we wanted.

After a few hours on and off the trolley, we headed to the next item on our “San Fran Bucket List”–The Painted Ladies and the Full House house!  The homes were so quaint and charming but much to my dismay there was a major disappointment–the Full House house no longer has a red door! What ever happened to predictability? 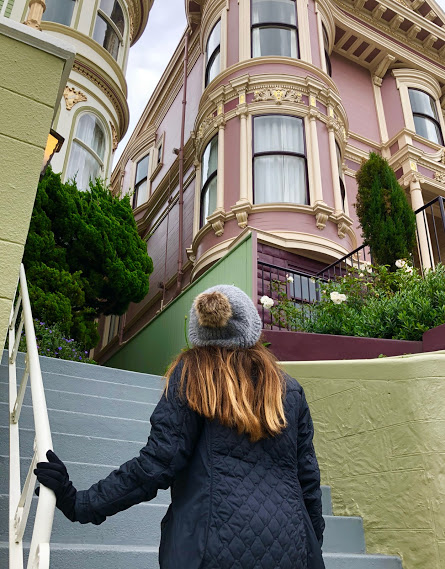 Our next stop was the Palace of Fine Arts.  We honestly thought we were transported to the Roman Forum in Italy! The Palace of Fine Arts was originally constructed for the 1915 Panama-Pacific Exposition, a world fair held in San Francisco to celebrate the completion of the Panama Canal, as well as the recovery of the 1906 earthquake. The palace, located in the Marina District of San Francisco, was inspired by Greek and Roman Architecture and left us speechless! 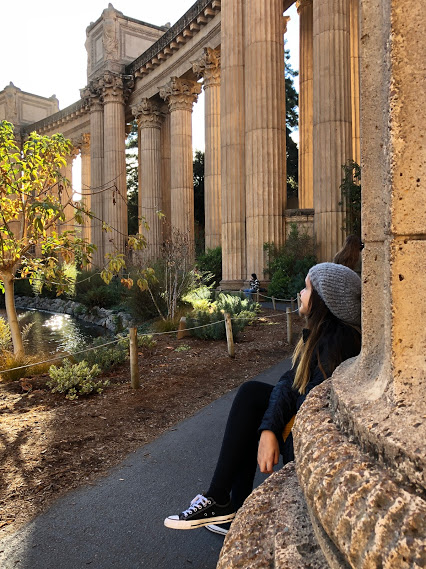 Right across the road from the Palace of Fine Arts is Crissy Field-East Beach–located at the east end of Crissy Field Park in the old Presidio Area of what is now Golden Gate National Recreation Area. This was a perfect spot to just sit, relax and soak in the gratitude for where we were. 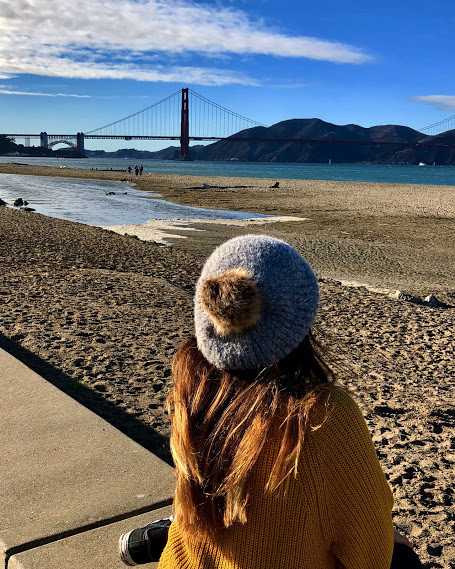 Sunday was our absolute favorite day! Something I never even knew was on my bucket list was an epic bike ride across the Golden Gate Bridge! It was a very strenuous uphill ride to just get to the bridge and we had to share the path for a bit with marathoners! After finally getting to the bridge after several breaks, we were anticipating a smooth level ride but didn’t think about the loud cars and massive trucks zooming past. Despite having our own bike lane, we were freaking out! Sharp mini turns on the lookout points made my mom almost pee her pants! After my initial moment of panic when we first began,  this turned into one of the most awesome experiences I have ever had! 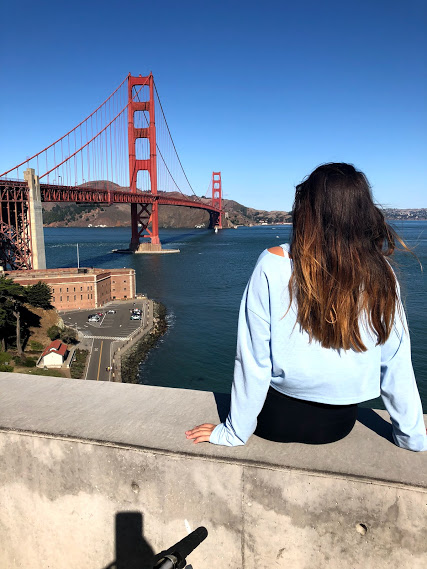 As we rode along, I looked over my shoulder to see something jump out of the water! I made a quick stop and looked again, to see a whale jumping and spouting out of the water!  I wish I would have taken a photo but was too scared to stop, as I could see the end of the bridge and just wanted to get across.

After we made it to the other side, the super fun  part began, in my opinion– a windy downhill ride to Sausalito! As I sped down the hill I completely lost sight of my mom because she was riding her breaks barely going like .2 miles per hour! After making it down the hill,  I had a lot of time to snap pictures while my mom was snailing it downward.

After this vigorous and exhilarating bike ride, we were famished.  As we entered Sausalito we spied a beautiful restaurant right on the water, parked our bikes in their lot and enjoyed a delicious lunch at The Trident. 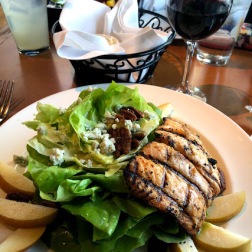 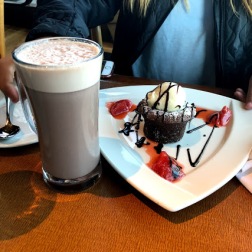 To return to San Francisco for our 6pm flight,  we took a gorgeous and relaxing Ferry Ride that offered incredible panoramic views.

With jello legs, we rode out bikes back to Blazing Saddles Bike Rental and returned to our hotel to catch a cab to the airport.  We were going to take the BART train again, but the thought of walking to the station was out of question after the 5 hour bike ride.

There is still so much of San Francisco left undone that there is 100% certainty that we will be returning.  Being my very first trip to California, I couldn’t be happier. San Francisco is such a beautiful, diverse city with the friendliest people and an amazing culture. I miss it so much already. 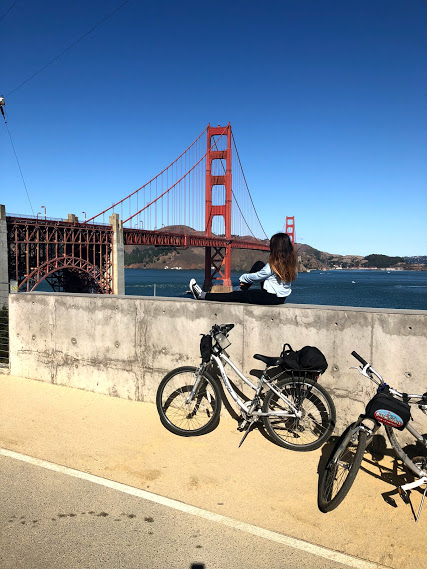 Have you been to San Francisco?